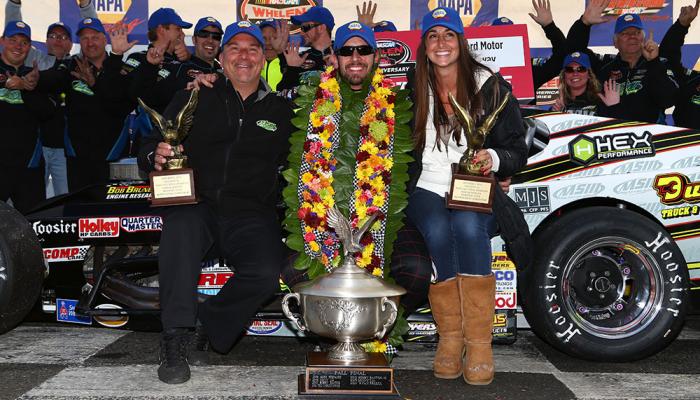 DAYTONA BEACH, Fla. – After multiple near misses, Mike Smeriglio III gathered his first title as car owner in 2014, his ninth season fielding an entry for the NASCAR Whelen Modified Tour. It felt so good, he couldn’t let it go.

“You don’t really know what it’s like to be a champion until you come down to Charlotte and celebrate and see your car in the NASCAR Hall of Fame with the championship trophy,” Smeriglio said. “That’s unbelievable. You can’t anticipate that until it actually happens, and when it does, it’s almost a double-edged sword. You got here, but now you want to continue to be here.

“Now that I’ve felt that, I don’t want to lose that feeling.”

Not only did his No. 2 Dunleavy’s Truck & Trailer Repair Chevrolet team keep the good times going, they upped the ante. The 2014 title came by way of one checkered flag. Driver Doug Coby piloted the car to seven during the defense.

“This year was more rewarding because we were more of a dominant car, and we made the right decisions to make us a better team,” Smeriglio said.

The decisions he mentions were significant. Mike Smeriglio III, of Greenwich, Connecticut, pushed for a change to spec engines while crew chief Phil Moran led the switch to LFR Chassis. Coby backed both decisions, and a new course was set for the title defense.

The new combination was strong right out of the gate with a dominant win in the opener at Thompson, and success was sustained. A couple of racing incidents set the team back in its attempt to retain the title, however, and it took wins in each of the last three events on the schedule to retain the crown.

It was an amazing accomplishment that Smeriglio attributes to Moran’s leadership and Coby’s skills from the cockpit.

“It really starts with the crew chief,” Smeriglio said. “You have to be prepared and you have to be organized, and that’s what Phil does each and every day. With Doug’s ability as a wheelman and as a systematic driver, the two of them put themselves in a position to really be a dominant team for those last three races.”

So can Mike Smeriglio III and his No. 2 team continue to keep the good times rolling?

“Every season, every race, every track is always going to be different,” Smeriglio said. “Different scenarios always play out where someone can get on a hot streak or somebody finds something.

“Do I like where we are? Absolutely. Do we need to make any changes? No. The offseason will dictate what happens next.”