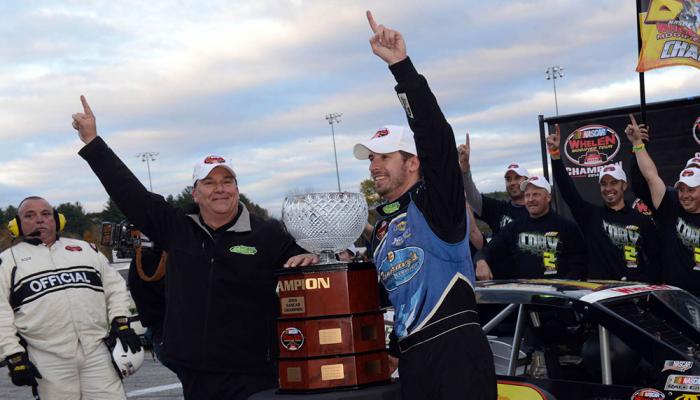 One of the best brand ambassadors in the Whelen Modified Tour garage, Mike Smeriglio III’s effervescent demeanor and willingness to help out in any way he can buoys his team as well as the entire tour contingent. It’s not uncommon for Smeriglio to loan a back-up car to a competing team that encountered issues and was in danger of not being able to participate in a race, or to give an opportunity for a younger driver to race a second team entry.

“The people in the garage, the officials, the track owners; it’s my second family,” Smeriglio said. “You treat those the way you want to be treated back. I’ve always been given a lot of respect in this series, and because of that it’s my way of giving back.”

The relationships he has forged on the Whelen Modified Tour are the effect, but Smeriglio’s passion is the cause.

“It’s a level of NASCAR that I always wanted to be a part of,” Smeriglio said. “That goes back to my early days at Danbury. It’s what my dad had a passion for and it was in my blood from a young age. I just love the sport. I just love the modifieds.”

Smeriglio’s first exposure to stock car racing came at the now defunct Danbury Racearena in his native Connecticut at the age of four. His father was involved with a couple of different teams there, and it was a standing Saturday night appointment for Smeriglio through his teens.

The experience left an indelible impression.

“That’s where the love of the sport originated for me,” Smeriglio said. “Outside of family and business, my next passion is NASCAR.”

An accountant and financial planner, Smeriglio’s entry point into NASCAR racing on the other side of the fence came in the late 1990s when he became the owner of Frank Wainwright’s SK Modified team at another famed Connecticut oval, Stafford Motor Speedway. When Wainwright retired, Smeriglio co-owned the No. 47 Stafford SK with various drivers until an opportunity came along to go tour racing.

A resident of Greenwich, Connecticut, Smeriglio bought his first Whelen Modified Tour car from the No. 50 team that was closing up shop two years after a championship with driver Todd Szegedy. Smeriglio was able to attain Szegedy for his new No. 2 Mike Smeriglio III Racing team for their first season together in 2006.

Smeriglio finished as the championship runner-up twice with Szegedy, and had five other seasons in the top five of the final standings, but they were never able to break through for the title. After 10 wins together, the pairing parted ways after the 2013 season and Smeriglio went out and got Doug Coby, a driver just one year removed from his first championship.

For the financial planner Mike Smeriglio III, it was an investment that provided immediate returns: the long-awaited championship.

And Smeriglio’s valuation of the asset he invested in?

“Doug Coby really is the complete package as a driver,” Smeriglio said. “He’s talented, smart, calculated, easy on the equipment, and he’s always there at the end. He may not lead all of the laps, but when the checkered flag nears, he’s always in the best position that he’s been in for the entire race.”

Coby may have been the final piece to Smeriglio’s puzzle, but one piece already in place took great satisfaction in seeing the mission finally accomplished, the No. 2 team’s veteran crew chief Phil Moran.

“To win the championship for him is great,” Moran said. “He’s finished second, third and fourth in the points before, so to see the joy in his face in the last race at Thompson was just incredible. It was really, really good to win it for him, and to win it for the guys that have been with Mike for a long time and have been close before.”

Moran has great respect for his boss, who takes a hands-off approach when it comes to the technical aspects of the team, and serves in more of a coach and motivator.

“Working for him is incredible,” Moran said. “He’s the best kind of boss you could ever want mainly because he has the trust in me and the team to do what we need to do.

Smeriglio’s resolve has been tested through his journey to this first title though. He had the championship within reach in the 2011 finale, but a late-race accident ended the dream.

“That was the most difficult one to swallow, but you hear it often that you have to lose one to win one,” Smeriglio said. “Well, I’ve lost two, so hopefully we’ll win a second one to make up for it.”

For a person as passionate and as driven as Smeriglio, there will certainly be some time to reflect on this year’s accomplishments, but he’s also more than ready to turn the page.

“I’m really looking forward to the banquet and celebrating with the guys, and as much as I am excited about what took place in 2014, I’m even more excited about the opportunity in 2015,” Smeriglio said. “I think we’ve got a great package, and we’re making the team even better moving forward.”