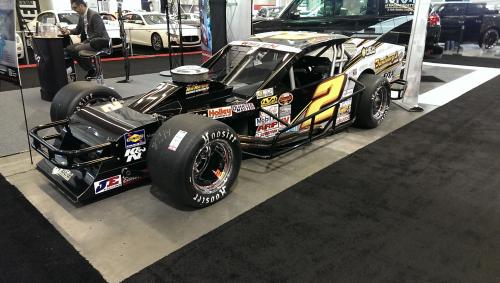 THOMPSON, CT – For the first time, Thompson Speedway Motorsports Park (TSMP) will be at the New England International Auto Show in Boston, MA on January 15 – 19, 2015. On display in the TSMP booth will be the Mike Smeriglio, III – owned No. 2 Dunleavy’s Truck & Trailer Repair/A&J Romano Construction/HEX Performance Chevrolet driven by two-time, and defending NASCAR Whelen Modified Tour Champion, Doug Coby. The particular car that is on display is a newly built LFR Chassis which Crew Chief, Phil Moran, has prepared for the team’s title defense.

In addition to getting a close up view of one of New England’s most beloved race cars, attendees will also have the opportunity to win an exotic car driving experience, courtesy of Circuit One, or a family four-pack of tickets to the 2015 Icebreaker, by stopping by the TSMP booth.

Show attendees are also encouraged to stop by over the weekend for driver autograph sessions and the Racing Experience Photo Booth. On Saturday, Woody Pitkat, driver of the No. 88 Buzz Chew/Elbow East Chevrolet NASCAR Whelen Modified Tour car will be at the TSMP booth. Pitkat, who also campaigns a Sunoco Modified at TSMP, will be signing autographs from 1PM until 2PM. In 2014, he won two of the three Coors Light Pole Awards, during NASCAR Whelen Modified Tour races. There will also be a photo booth on Saturday from 5-7 PM, and Sunday from 4-6 PM, where show attendees can dress up like a driver and strike a pose alongside a real race car.

Ticket prices, hours and more information for the New England International Auto Show can be found on the website www.bostonautoshow.com